It was the end of an era.

This week in 1915, the Hudson’s Bay Company closed, for good, its old “Fort George” trading post near the junction of the Fraser and Nechako Rivers. A fixture in the area for almost 110 years, the post was a catalyst behind the eventual development of the Prince George area. Its four walls stood witness to a century’s worth of history as northern British Columbia slowly opened to the outside world.

The Fort George post was originally established in 1807 by explorer Simon Fraser as he charted fur trade routes for the North West Company. Named after King George III (the reigning monarch of the time), the post remained largely isolated and unchanged for almost 100 years, its officers quietly serving the stream of hardy trappers, traders, natives, prospectors, outfitters, settlers and other parties who passed through the area.

In the late 1870s, survey teams for the Canadian Pacific Railway visited the post to map a route through the Yellowhead Pass, but the line was eventually laid farther south.

Fort George’s relatively quiet existence was broken in 1903, however, when construction of the Grand Trunk Pacific railway brought men and materials to the area, and the post became a base from which to plan and build the tracks through the region.

By 1906, settlers had formed a small agricultural community around the post, and three years later, in 1909, the competing townships of Central Fort George and South Fort George were well established on lands to the north and south.

By the end of 1914, the railway was up and running and the new townsite of Prince George was growing by leaps and bounds. With the fur trade dwindling, water-based travel declining, and the Hudson’s Bay Company channelling resources into its growing chain of department stores, Company officials decided to pull the plug on the old Fort George trading post.

The decision surprised local residents and fuelled a wave of nostalgia.

There are many of the pioneers still residing in the district who will remember with peculiar interest the old Hudson’s Bay Post, and could its ancient walls have retained in phonographic record the tales and incidents of the past 110 years a lively and real red blood history of events would be the result thereof.1

It is perhaps fitting that the site of the old Fort George trading post is now home to historical records of another type: Prince George’s regional museum, The Exploration Place, now stands on the very same spot. 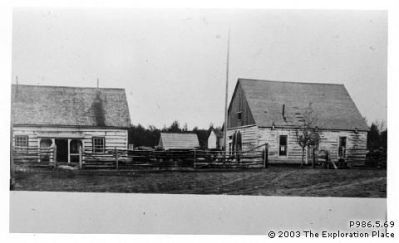 The Hudson’s Bay Company’s “Fort George” trading post, circa 1913. The post was situated on the banks of the Fraser River, on the site of the present-day Exploration Place museum.
(Photo: The Exploration Place)