Did you know that Terry Fox first announced his intention to run his epic Marathon of Hope after completing a footrace in Prince George?

Fox, a university student from Port Coquitlam, BC, lost his right leg to cancer in 1977. Immediately following his amputation surgery, the plucky 18-year-old began formulating a secret plan to run a “Marathon of Hope” across Canada as a means of raising awareness of and funding for cancer research.

Fox began training for his marathon goal in February 1979. By late summer, he wanted to enter a race that would test his mettle. Fox chose Prince George’s “Prince George to Boston Marathon” (now the Labour Day Classic) as his proving ground. He arrived in Prince George for the September 1 race primed to run, with his brother Darrell, his close friend Doug Alward and future-Man-in-Motion Rick Hansen along to compete with him and cheer him on.

Fox came dead-last in the 17-mile race, finishing a full ten minutes behind the next-slowest competitor. But he was encouraged enough by his performance to commit to his Marathon of Hope plans. He officially announced those plans to family and friends at the post-race banquet. 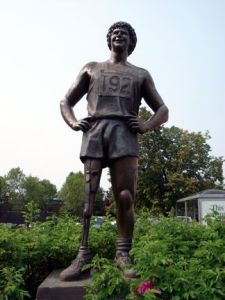 Eight months later, in April 1980, Fox dipped his artificial leg into the ocean near St. John’s, Newfoundland, and set off west on a journey that he hoped would take him to some 7,000 kilometres to the waters of Victoria, BC. Sadly, Fox was forced to abandon his quest on September 1, 1980, after learning that his cancer had returned and spread to his lungs.

Fox stopped running just outside Thunder Bay, Ontario, but his legacy ran on. The Marathon of Hope raised over $23 million for cancer research, sparked government funding for new cancer research initiatives in BC and Ontario, broke stereotypes about what it meant to have cancer, and inspired countless people affected by the disease. The Terry Fox Run, a Canada-wide fundraising event organized by the Terry Fox Foundation, was first held in 1981 and continues annually to this day.

The statue of Terry Fox that stands in Prince George’s Community Foundation Park (733 Dominion Street, beside the Four Seasons Leisure Pool) marks the finish point of the 1979 footrace and celebrates this courageous and influential young man and his connection to our city. Fox is shown wearing his “Prince George to Boston” race bib in recognition of the role Prince George played in getting him to the start line of his dream — and to a finish line that forever changed the course of cancer research and support activities in Canada.

Listen to an interview with Terry Fox by Ted Withers of the CBC.

Thank you to Chelsea Dunk, Heritage Project Assistant at the Prince George Public Library (PGPL) and facilitator of the 2017 PGPL Downtown Walking Tour, for providing the inspiration and some of the material for this story. 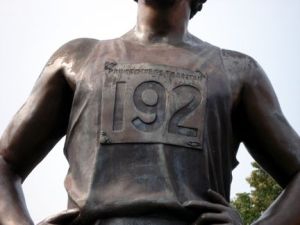 Reports from the Road: